The History of Cruise Moab

The first TLCA “Unofficial Moab Get Together” Event was held on April 29 to May 5, 1996. Al Roth “Candle Stick” a member of the Toyota Land Cruiser Association (TLCA) and the Gold Coast Cruisers of Oxnard, California came up with the idea of having Toyota owners get together and 4-wheel in Moab. He printed the idea in the Nov/Dec 1995 issue of Toyota Trails. He got a large response from cruiser heads wanting to do it. Al printed some “UNOFFICIAL MOAB GET TOGETHER” t-shirts and headed out to Moab in his FJ40 on April 27, 1996. Al was also transporting “LC” the Armadillo on its cross county journey. “LC” was the TLCA mascot, which started his journey on the East Coast, and was being carried from one TLCA Chapter to the next by way of Land Cruisers and Mini Trucks until it reached the West Coast.

About 36 Cruisers and Mini Trucks showed up at the Slick Rock Campground. Al had never been there and didn’t know any of the trails. As it turned out Dave Brown “Red Fox” another TLCA member just happened to be staying at Slick Rock Campground wheeling with some friends. Dave’s group had been wheeling in Moab for several years and knew the area pretty well. Dave “Red Fox” and his friends led Al and the “Unofficial Cruise Moab” group on the trails through Canyon Lands. It was so much fun for everyone that they wanted it to become an annual event. Kevin Ehrlick from the Rising Sun Club of Denver, Colorado volunteered to have Rising Sun host the event the following year.

Cruise Moab has become one of the premiere annual TLCA events. It has been the result of a lot of hard work of all the CRUISE MOAB committees, RISING SUN volunteers and other TLCA chapter volunteers over the years. 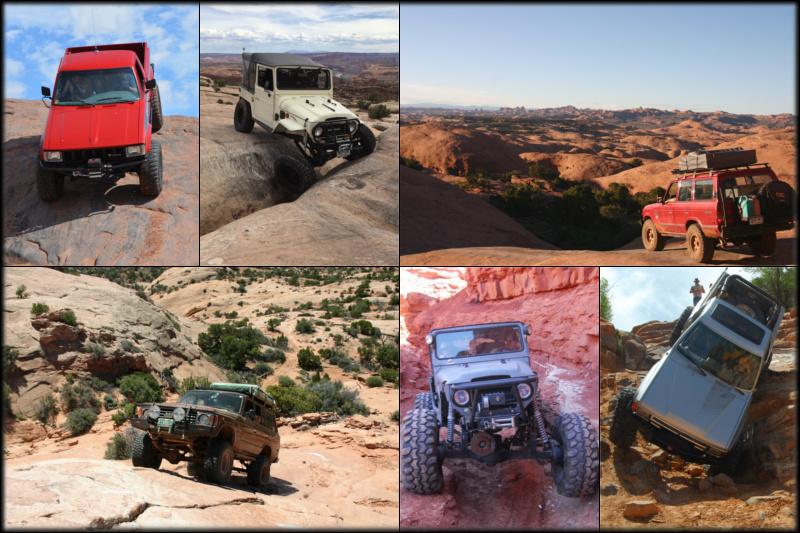